The "Harry Potter and the Cursed Child", which is the eighth story, will be staged as a long-run theatrical play in Japan, with Japanese cast.

The popular "Harry Potter and the Cursed Child" (produced by Sonia Friedman, Colin Callender, and Harry Potter Theater Productions) play, which has been a world-wide hit, will be staged with Japanese cast this summer, 2022. For the first time, this long-running play from London, New-York, will be staged in Asia. It will be the second non-English theatric following the German version, which will begin showing in March 2020.

This play will be the commemoration for the 70th anniversary of the opening of TBS. HoriPro Inc., already with experiences with Japanese versions of "Billy Elliott" and "Mary Poppins", will be in charge of of the theatrical production. The play will be staged at the TBS Akasaka ACT Theater (Akasaka, Tokyo) from the summer of 2022. TBS Akasaka ACT Theater will proceed with a full scale renovation before then to turn the venue into an exclusive Harry Potter theater. It will be a long running play, with no showing time limitations until further notice.

Created by renowned British writer J. K. Rowling, the "Harry Potter" novel series (7 volumes) is still the bestseller for children to adults of all ages around the globe. The theatrical play version was created by J.K. Rowling, Jack Thorne, and John Tiffany, with Jack Thorne as the script writer. The director, John Tiffany, is the Tony Award for Best Director winner for his work in the musical "Once". As of now, this play had already been awarded 24 famous theatrical awards in the UK, including 9 Laurence Olivier Awards in various categories, making it the record keeper in the most categories awarded for one play. It also won 25 awards in the USA, and 6 awards of the highest honor Tony Award, including Best Picture and Best Director.

The play tells the story of what happened 19 years later after the last book of the series "Harry Potter and the Deathly Hallows", and is the first stage related to the world of Harry Potter. "The 8 stories of Harry Potter" was published under the name "Harry Potter and the Cursed Child: Part 1 and Part 2", and can be purchased in stores. The play's story is divided in two parts. You can watch them both on the same day, in daytime showing and nighttime showing, or you can watch it on separate consecutive days. This version with Japanese cast will be the 7th staged play, after London, New York, Melbourne, San Francisco, Hamburg (spring 2020), and Toronto (autumn 2020).

The creative staff includes Steven Hoggett in charge of choreography and staging, Christine Jones for props and equipments, Katrina Lindsay for costumes, Imogen Heap for music and arrangement, Neil Austin for lighting, Gareth Fry for sound, Jamie Harrison for special effects, and Martin Lowe as Music and arrangements director.

Tokyo is a city full of excitement and energy. And in Japan live many very passionate fans of Harry Potter. That's why the opportunity of performing the gorgeous and thrilling stage "Harry Potter and the Cursed Child", which has won numerous theater awards, at the TBS Akasaka ACT Theater in Tokyo in 2022, is the greatest pleasure. Together with HoriPro's President Hori, TBS's President Sasaki, and our partner ATG, we are looking forward to delivering magic to everyone.

It's a great honor to celebrate the 70th anniversary of opening TBS with a play "Harry Potter and the Cursed Child". I'm sure that millions of fans who live in Japan will be extremely happy about the arrival of such a world renown play in Japan. We hope to fulfill everyone's expectations and more.

It's a great honor to work with a UK creative team on producing Harry Potter's play for the first time. Our dream of staging a long-run play for HoriPro finally come true. Everyone can enjoy it regardless of age and gender, and I wish that as many fans as possible will be able to enjoy it as we did.

I'm excited to continue as a partner of the play "Harry Potter and the Cursed Child", which is turning into quite the global phenomenon. There are so many passionate fans in Japan, so we are aiming high. It's a great pleasure to be a partner with TBS and HoriPro, which are two the biggest production and theatrical troupe companies in Japan.

＜Synopsis​＞
Harry Potter, the hero of the magic world, is now a father of three children, and is working hard in the Ministry of Magic. While Harry struggles daily with the curse from his own past, his second son, Albus, is beginning to feel crushed by the pressure of being "The son of Harry Potter". When the present and the past becomes frightfully conjured together, the father and son will realize the painful truth that the dark world still exists...
Performance information
TBS＆HORIPRO present
J.K. Rowling’s
"Harry Potter and the Cursed Child" the Play 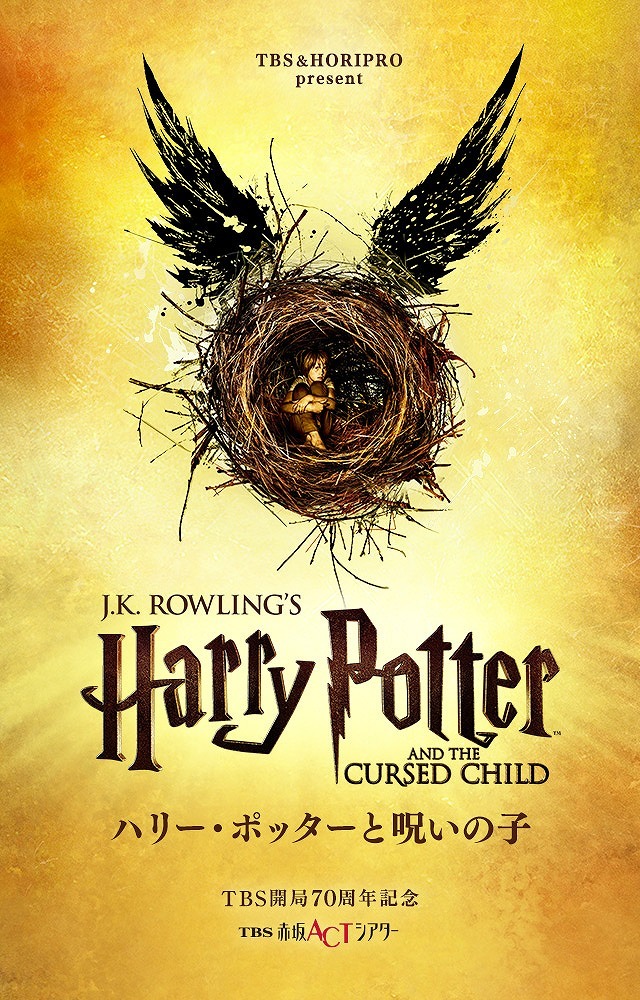 *Information may not be up to date as it is as of the time written or last updated.
HOME
Clipping
Japan Finder Solution Serviceについて
Category
Featured Articles
Travel
Business
Entertainment
Shopping
About usCopyrightTerms of usePrivacy policyContact